On July 20, 1968, Eunice Kennedy Shriver ushered in a new era for people with intellectual disabilities, when — with 1,000 athletes from three countries — she opened the very first Special Olympics International Games at Soldier Field in Chicago.

In 2018, Special Olympics will celebrate its 50th Anniversary of changing the lives of people with intellectual disabilities. Since those first Games in 1968, Special Olympics has grown to a global movement with more than 5 million athletes in more than 180 countries participating. And while sports will always be at the heart of Special Olympics, it is just a small part of what we now do:

That’s a lot to celebrate, and we want you to share in our excitement.

There will be plenty of opportunities to still get involved.

Read about the various Sponsorship Opportunities for the upcoming events to help us celebrate our 50th Anniversary.

Celebrate the Movement is a virtual fitness and fundraising challenge for the week of September 26 through October 3, 2020.  Special 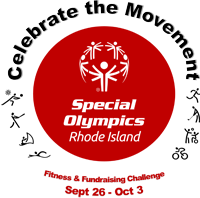 Celebrate the Movement is a virtual fitness and fundraising challenge for the week of
September 26 through October 3, 2020.  Special Olympics RI has developed this new
and innovative way to stay fit, be socially responsible and give you the opportunity to
support the over 4,000 athletes that participate year-round in our program.  You choose
your activity and fundraising goals.  Challenge yourself and set a goal worth your time!
We’ll be having contests for those who reach their goals, with prizes to be announced
in September.

Go to charityfootprints.com/sori2020 to set up your fundraising and activity tracking
page.  It’s really easy and fun to get your friends and family involved!